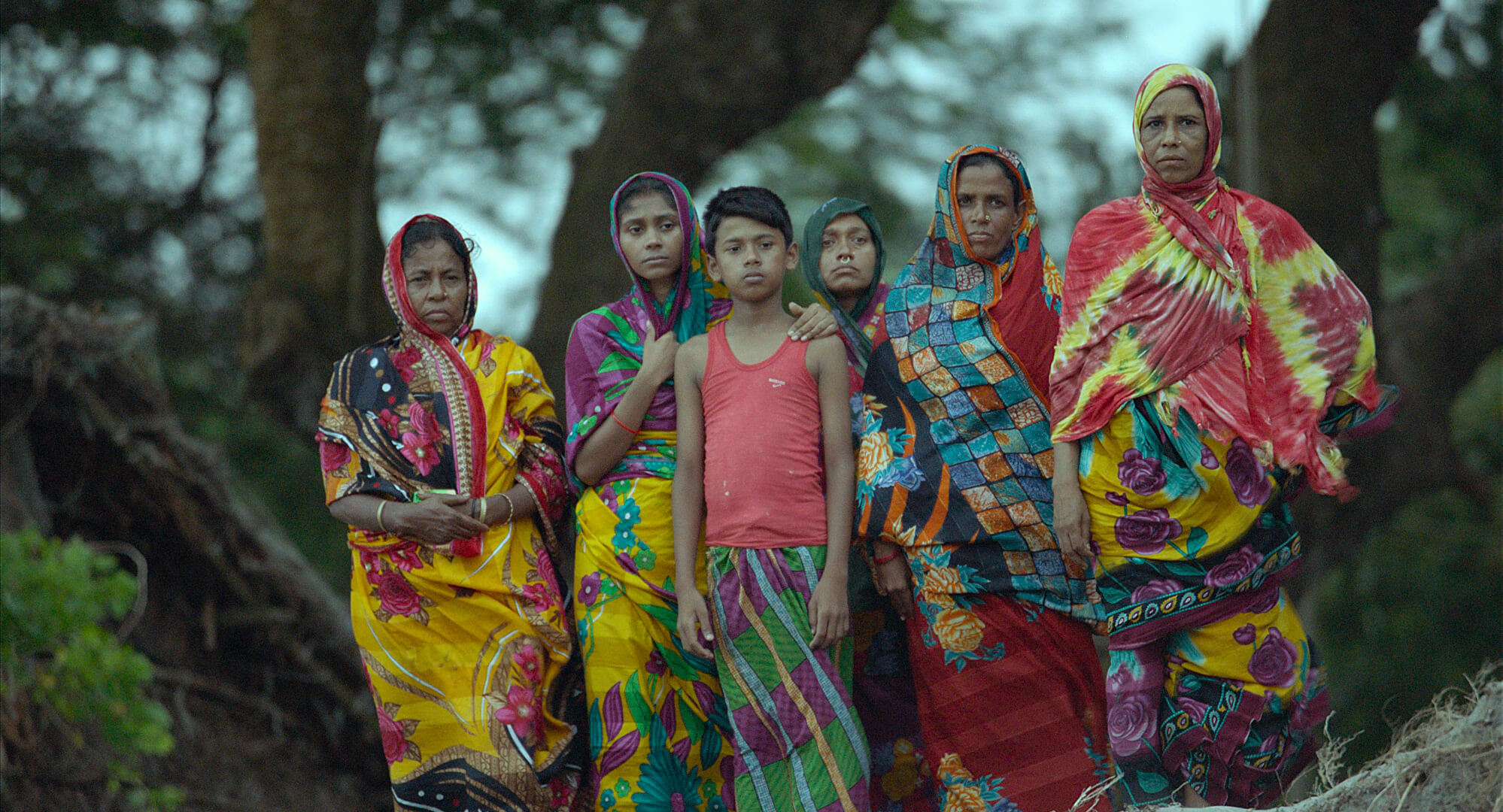 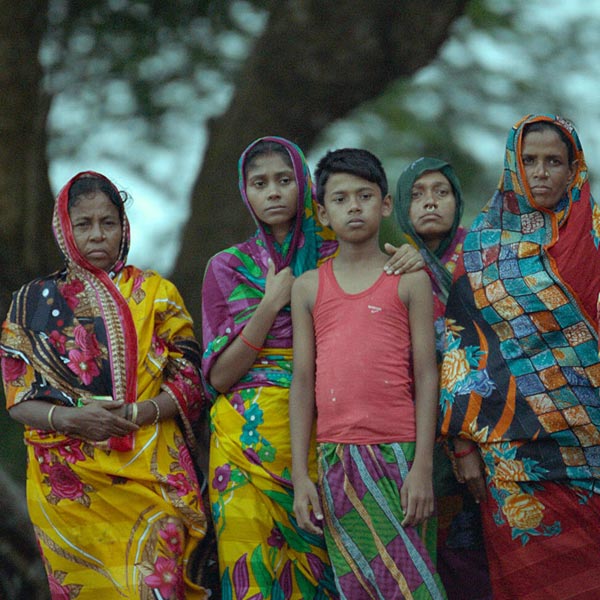 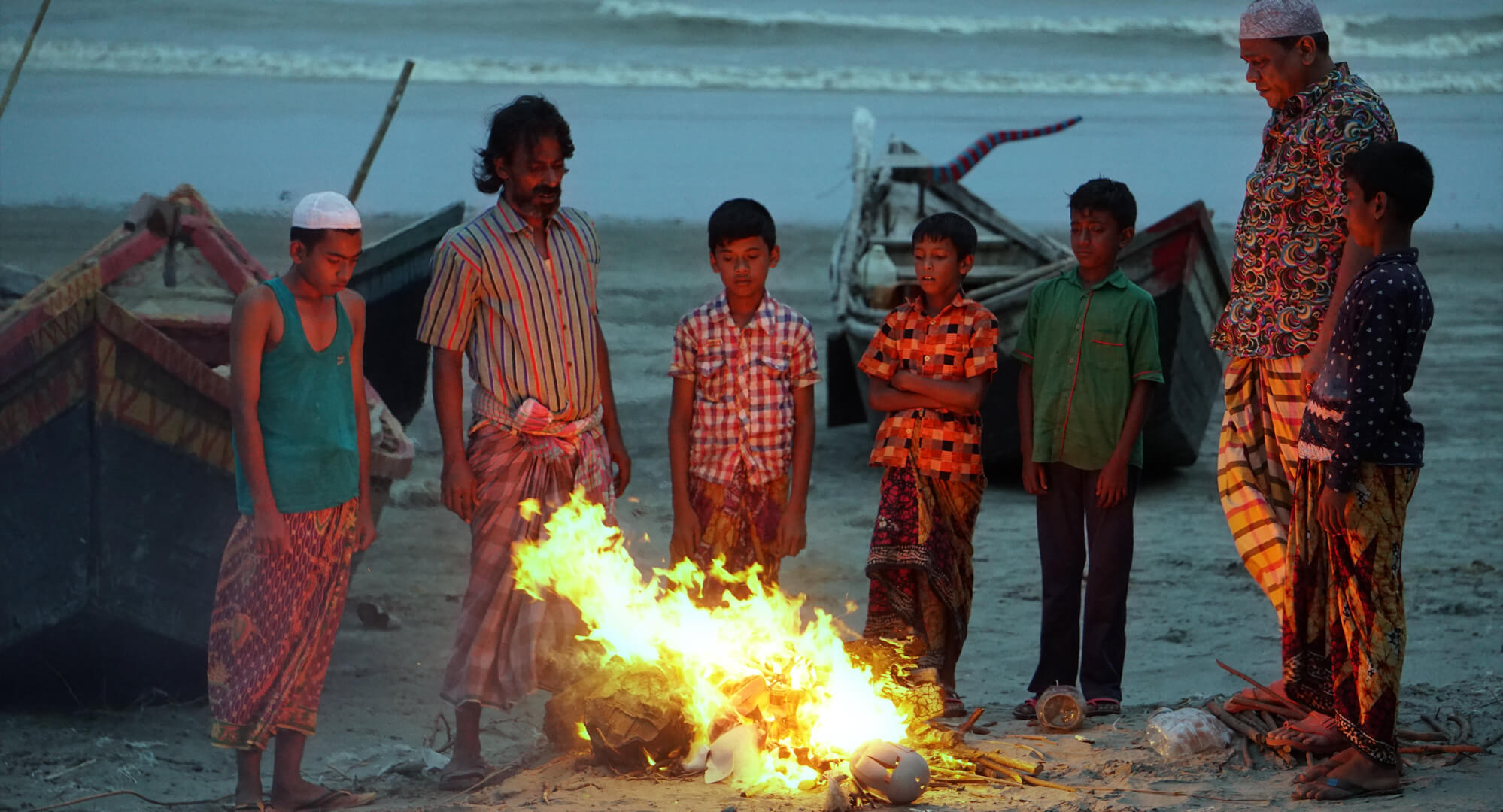 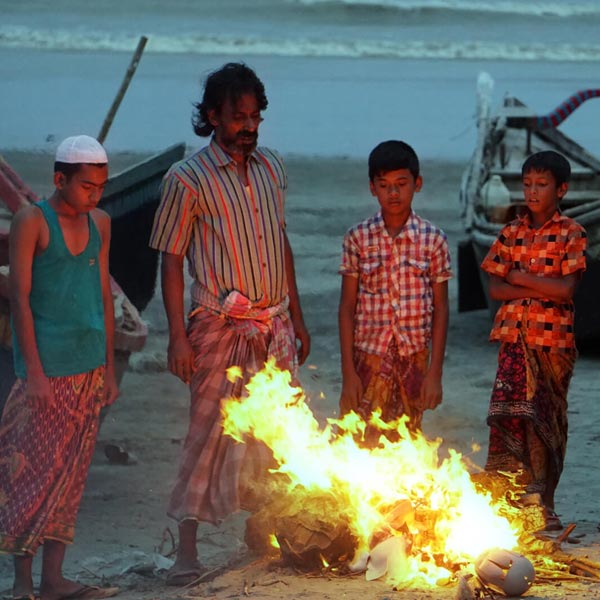 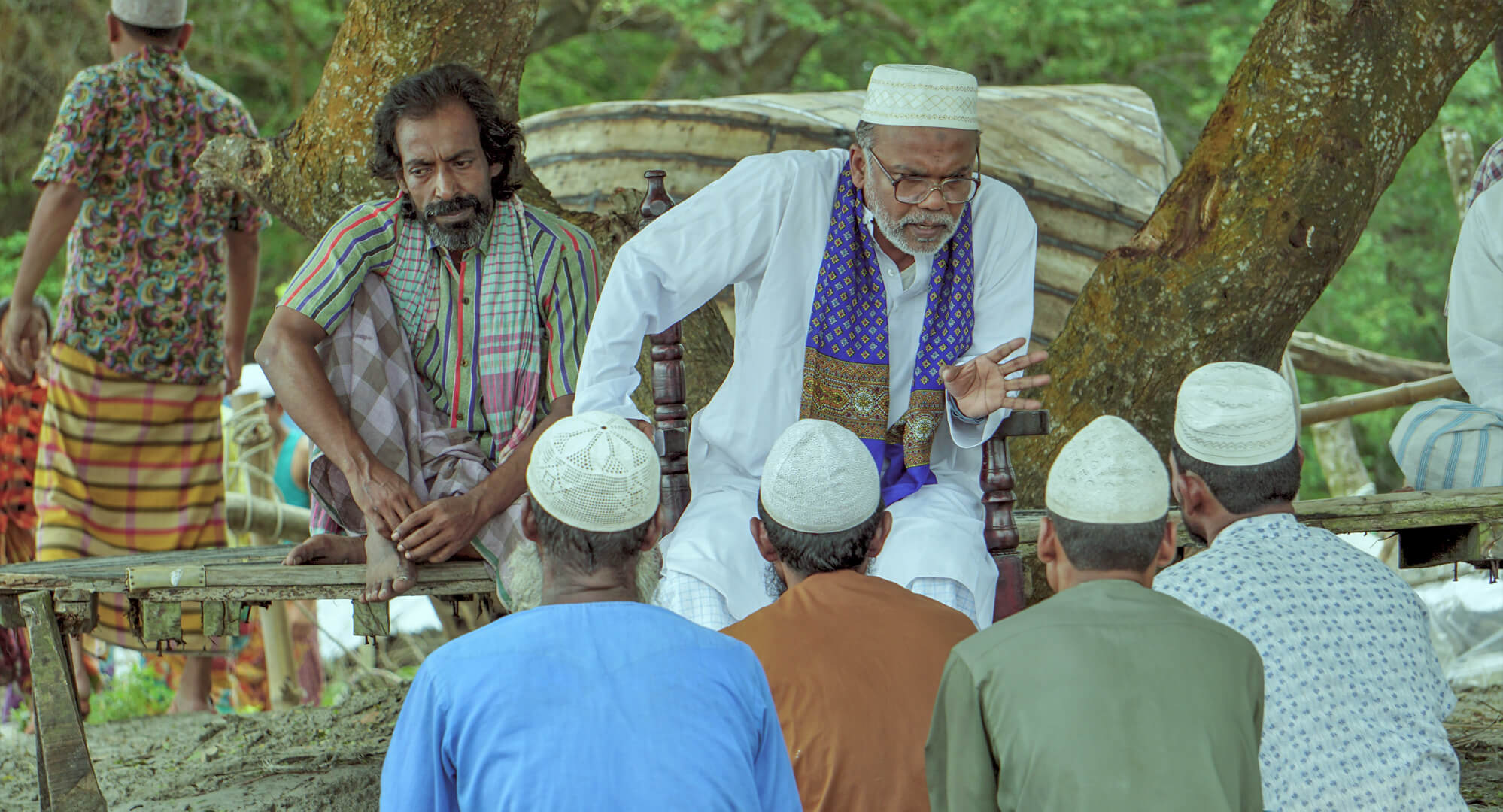 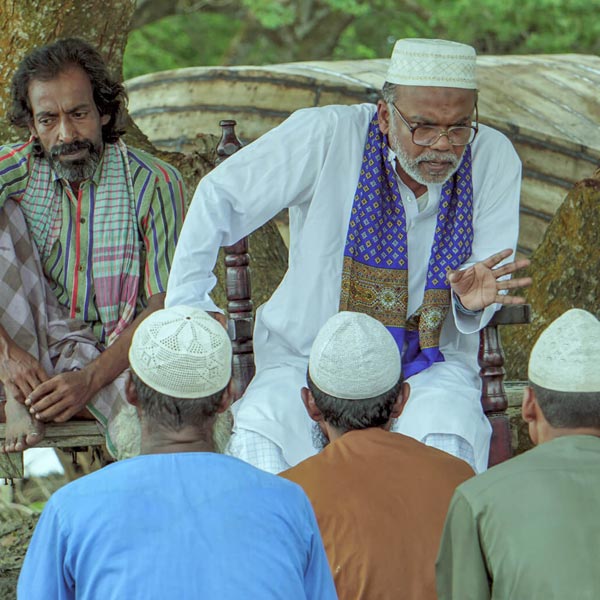 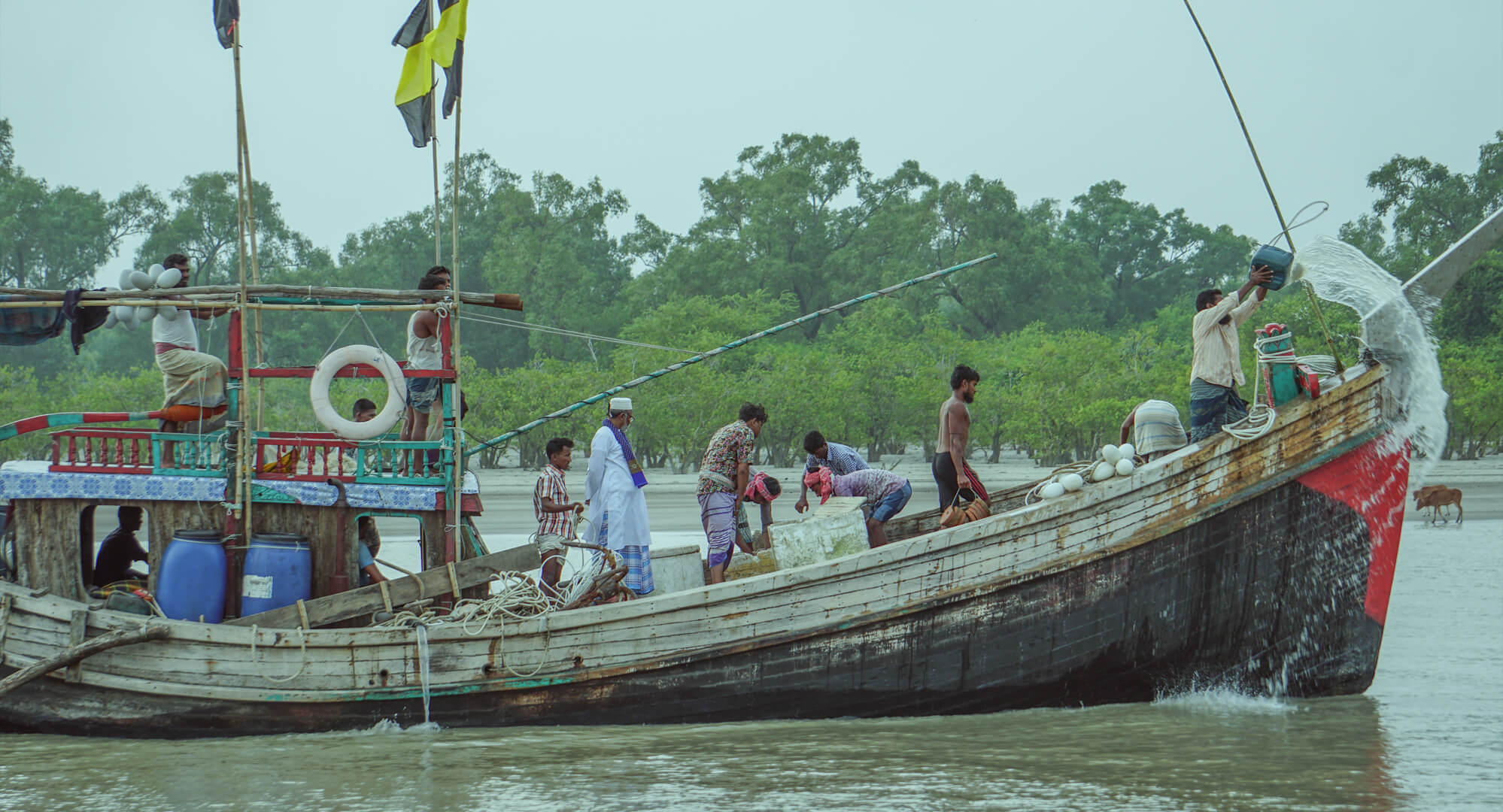 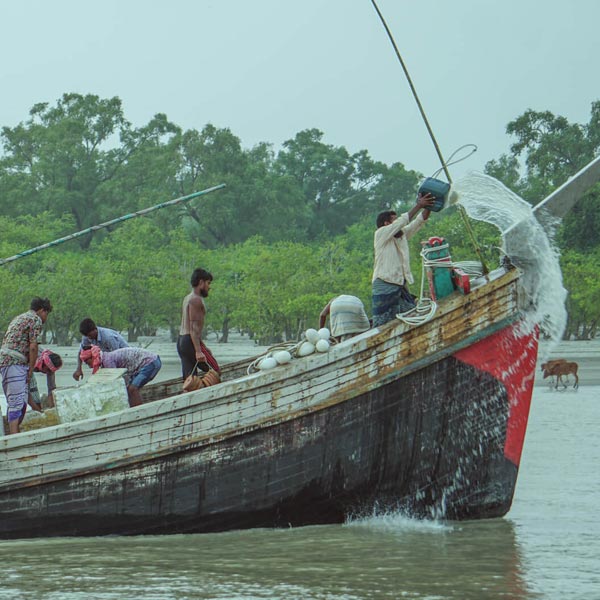 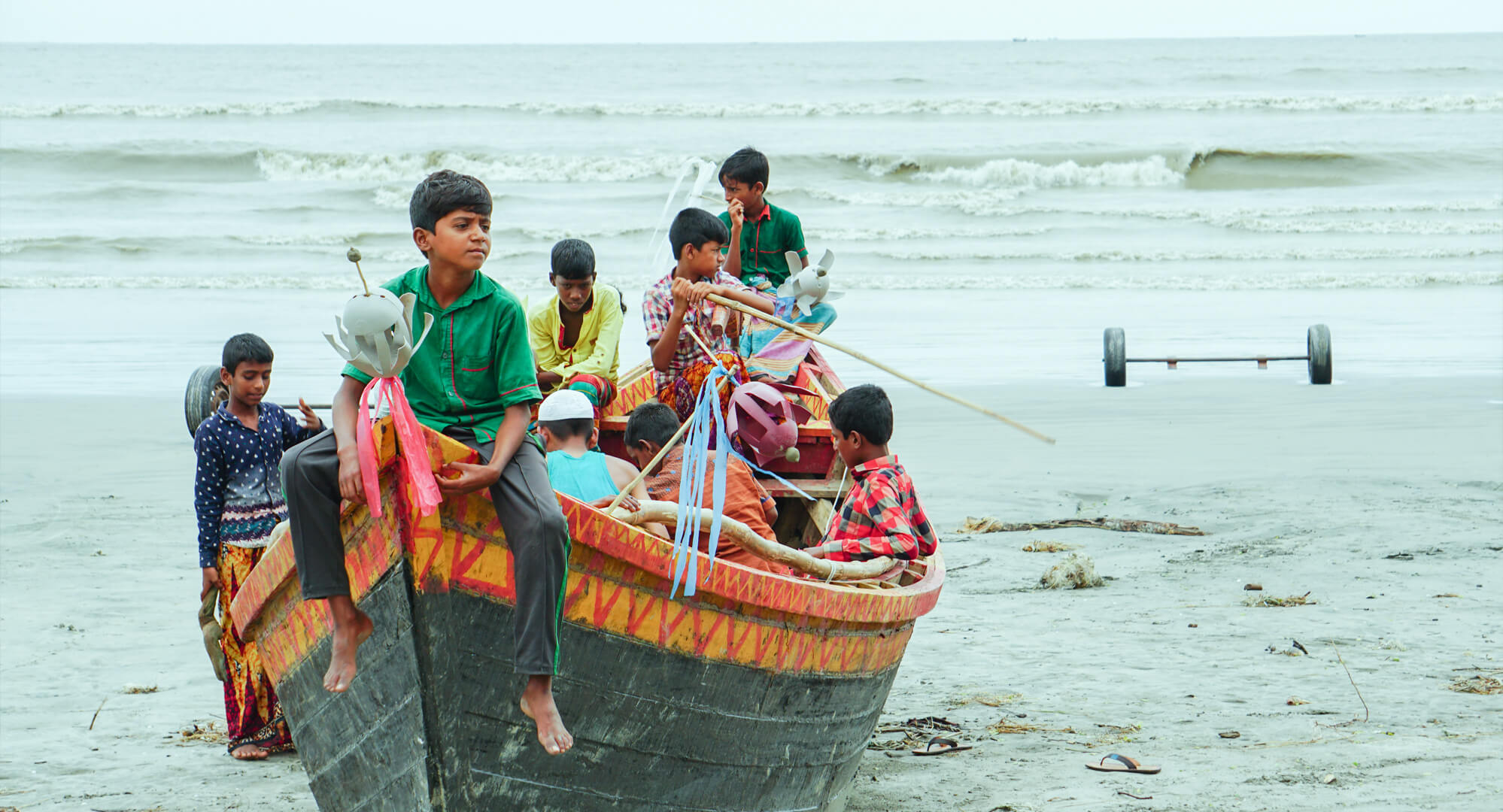 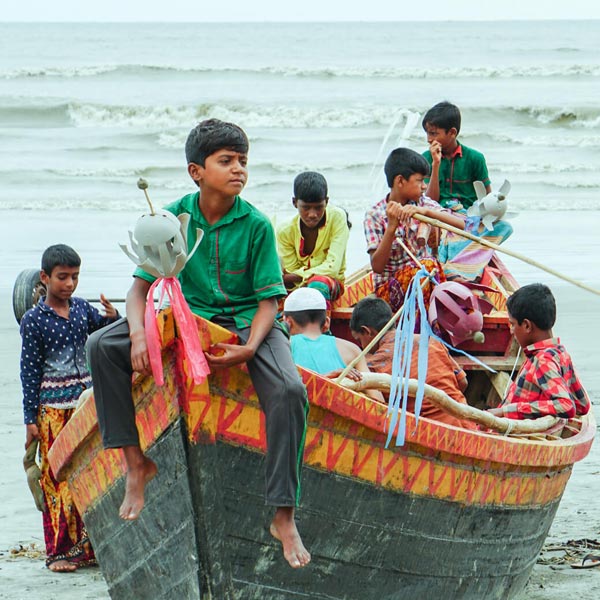 A CLASH OF CULTURES

For his latest art installation, Rudro journeys to a remote mangrove isle on the Bangladeshi Delta, a day's boat ride and a world away from modern, crowded Dhaka. Welcomed by the local fishermen and their leader Chairman, Rudro's modern ideas and lifelike sculptures enchant the young boys and his landlord's daughter Tuni. But when the local Hilsha catch proves elusive, the elders start blaming Rudro’s “idolatry” for the curse of empty nets. In this vanishing land where sea and sky merge, a storm is brewing and change welcome or not—is coming.

Bangladesh is often referred to as a ground zero for climate change. We are bearing witness to a primal, elemental conflict between land and sea, man and nature, past and future. Our coastal fishers are caught in the middle of it all.

When I first visited the Southern coasts, I ventured out of the popular tourist trails and walked miles to find the local Hilsha fishers. I remember watching them in awe as they pushed their tiny wooden boats into the choppy waters of the Bay of Bengal. Every boat generally faces three waves. The first one is a gentle tap, the second one tests your nerves, and the third can actually tip the boat over. It makes a boat fly! I began to wonder why these men face this danger on a daily basis. They became the focus of my very first research. Their coastal livelihoods are continually at risk as a result of cyclones, saltwater intrusion, and erosion. Their homes are regularly ravaged by tidal bores, yet they simply pick themselves up and return to fishing without any kind of lament or second thought. A primordial drive is at work here and this is what has fascinated me the most. 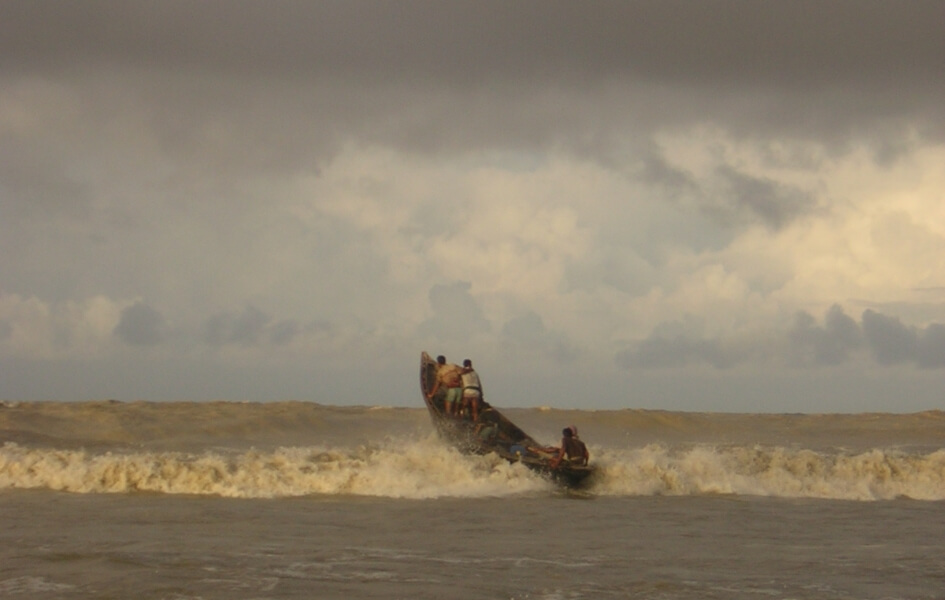 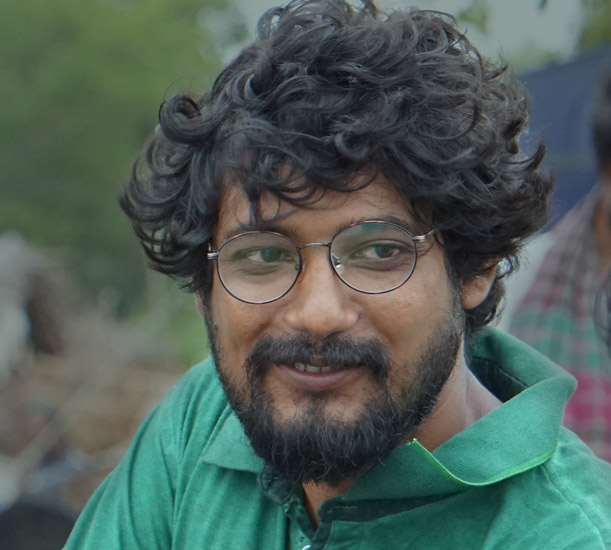 Rudro is a city-raised mixed-media sculptor. He journeys to this remote, elemental place, hoping to understand the people and their timeless way of life. He falls in love in a heartbeat, especially with Tuni. Her honesty and intrepidity captures his imagination. The setting of the wild island and the high seas of Bangladesh, as the photos reveal, is astonishing. Like Rudro, I am still in awe and I invite everyone to discover this community from the ground up. 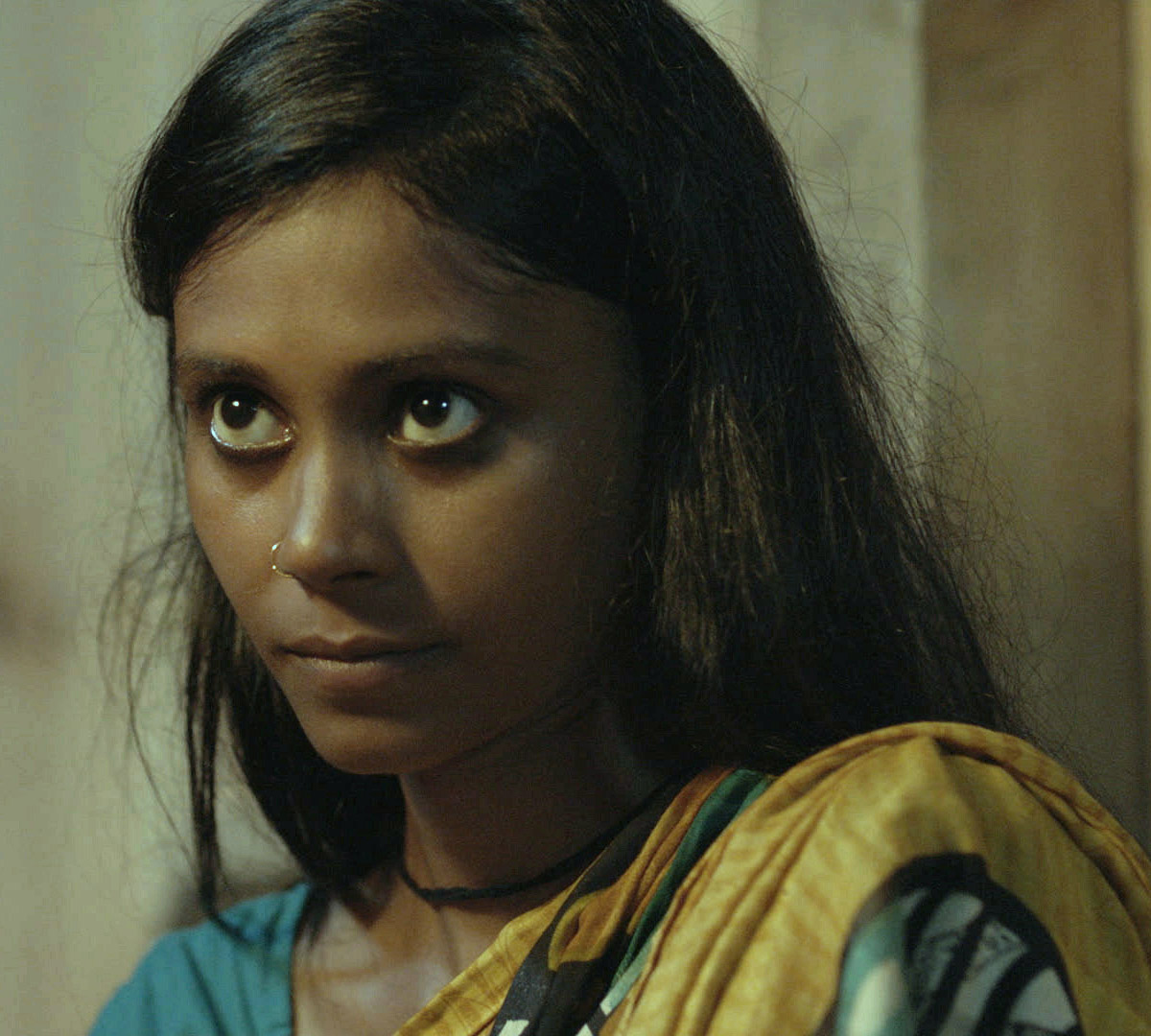 My character Tuni is a force of nature. She knows how mother nature works her magic. She wants to break free from patriarchal chains and explore the sea. She knows there's an entire world waiting to be discovered. Like most women I have encountered in fishing villages, she wants to reclaim her own identity. 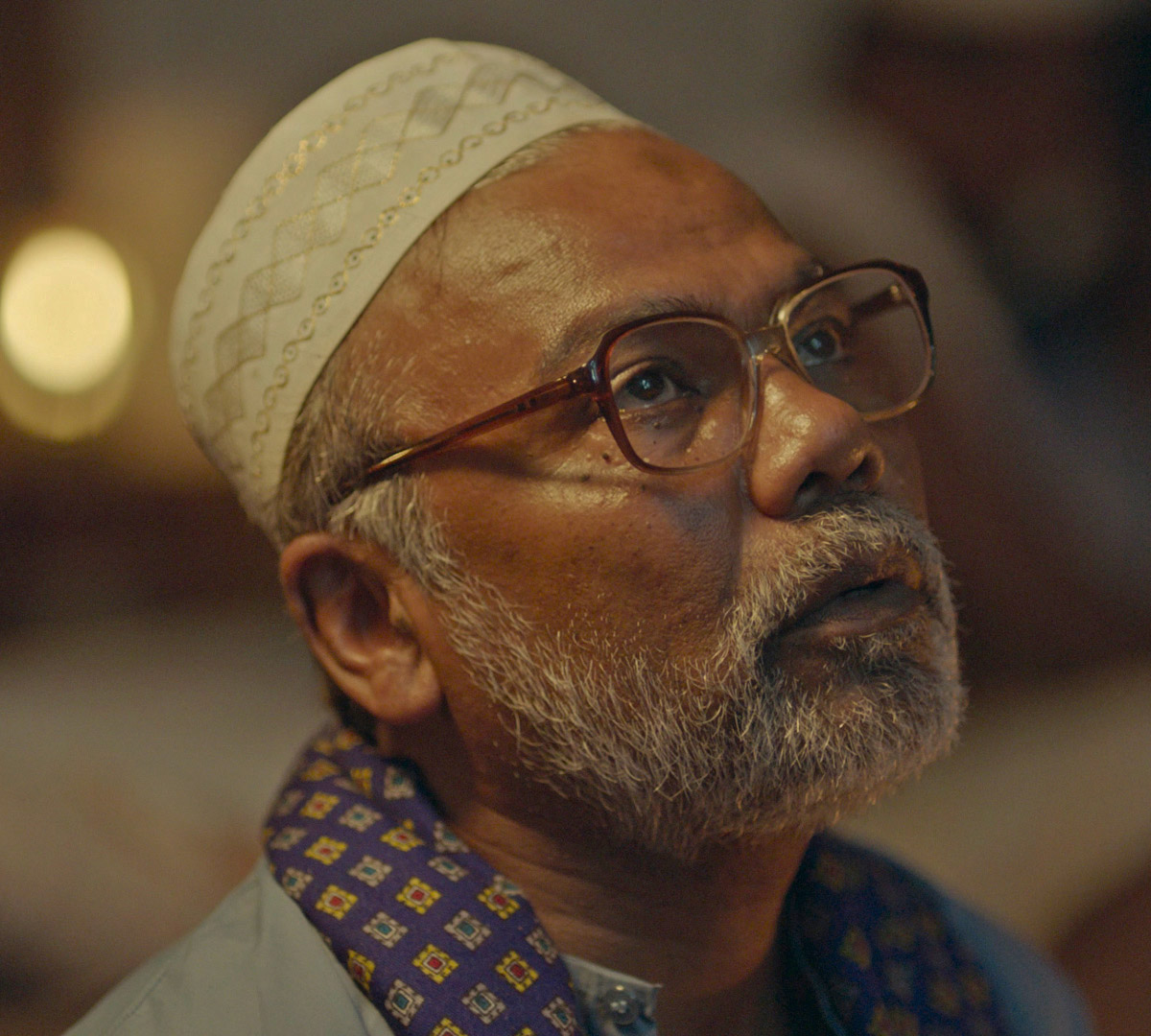 During my time with the fishermen, I tried to absorb all their mannerisms. I sought out their culture, their music, their routine. Their tales of daring seafaring elders fascinated me. One of the things that struck me was that every one of them survived a climate change disruption. Their struggle is real.

The Hilsha fish, called ‘Ilish’ in Bengali, is of national importance to Bangladesh. It is not only one of the country’s main staple foods, but also is of both religious and cultural importance. The Bengali New Year celebrations must begin with a Hilsha dish. But increased demand for the fish, which is popular throughout South Asia, has led to pressure on the fish species. Not only is the Hilsha in trouble, but so are the three million fishermen, fisherwomen and fishery workers who directly or indirectly depend on the fish for their livelihood.

Once abundant in Bangladesh's 100 rivers, Hilsha production began to decline in the 1970s, reaching an all-time low of just 0.19 million tonnes in 2001-02. Now it stands at 0.5 million tonnes. Uncontrolled use of mechanized Hilsha fishing trawlers in deep coastal areas is preventing upward spawning migration of the fish. Furthermore, the changes brought about by global warming have led to a gradual depletion of the Hilsha's breeding grounds, reducing populations of the fish even further. Hilsha, a marine species, migrates to estuaries and inland water for spawning purpose. Unless it gets favorable water condition for resting and breeding, it will choose a different course. This change in behavior is depicted in our film where we see shallow water fishermen suffering from the late arrival of fish. 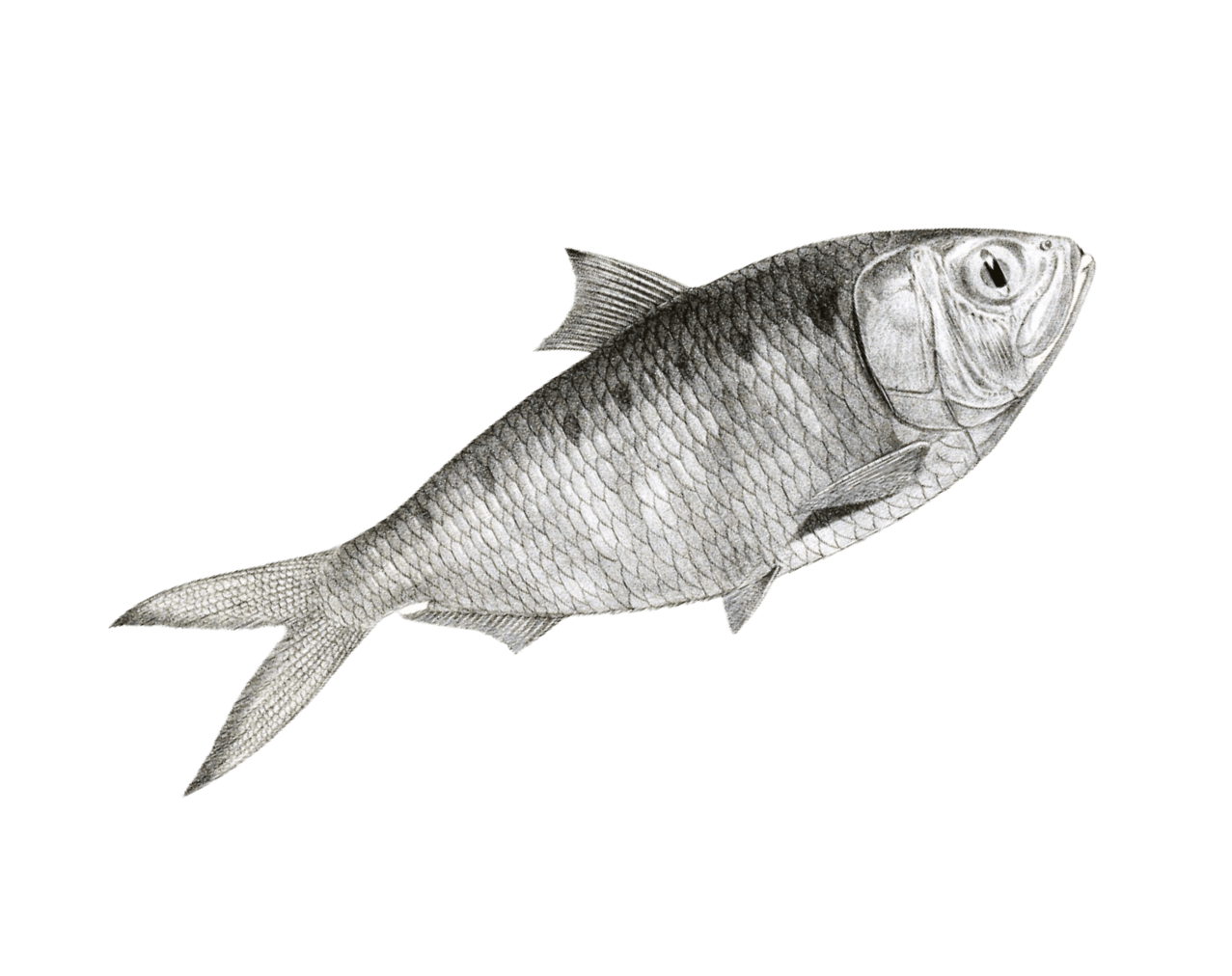